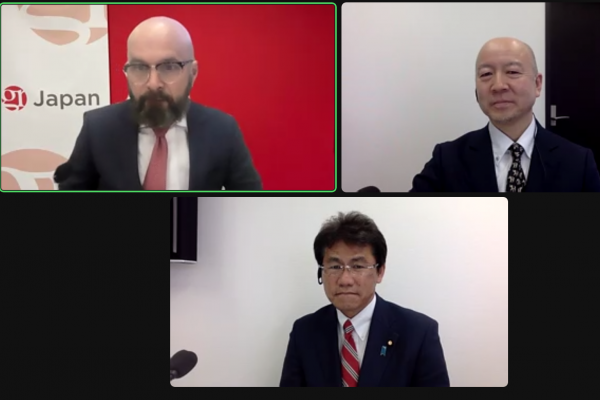 What Kishida’s “New Capitalism” means for the Japanese economy

Mr. Yoshino also shared his thoughts on “New Capitalism”, explains that in the idea of “New Capitalism” is not a viable economic theory but that the phrase is rather a political message intended to engage citizens and scholars.  He warned that support for Kishida could decline unless his Cabinet redistributes wealth in a way where constituents can see the change for themselves, such as through increased wages.  He said that Kishida has to deliver results within the “three golden years’” – the three years following this July’s House of Councillors election where there will be no national elections.  Kishida is aware of this opportunity and will bide his time until the House of Councillors, only making controversial changes after his majority in both Houses of the Diet are secure.  Until then the blueprint of his policies will remain bland or unclear.

Prospects of the Kishida Cabinet

After analysing the approval ratings of Kishida and the Liberal Democratic Party (LDP), Mr. Yoshino concluded that the Kishida Cabinet is stable for now.  According to “Aoki’s Law”, attributed to former Chief Cabinet Secretary Mikio Aoki, if the sum of the Cabinet approval rating and the ruling party’s approval rating is more than 100, the Cabinet is “rock-solid”.  Kishida and his Cabinet currently boasts a total of 108.  Data on approval ratings provides additional hints about Kishida and his Cabinet.  For example, Kishida is currently at a “Cabinet premium”, meaning that his personal support rate is higher than that of the LDP.  They also show that Kishida is seen as highly capable of executing policies, which points to a strong Cabinet.  Mr. Yoshino further explained how approval ratings are inversely proportional to the number of COVID-19 cases.  Mr. Yoshino alluded to a shift in perceptions of Kishida, from ambiguous and passive at first, towards a leader with a flexible mindset.

Mr. Yoshino noted that even if the Kishida Cabinet failed to fulfil its pledges, they could still remain in power so long as their support remained high relative to other parties.  He suggested that even the recent appointment of the new leader of the Constitutional Democratic Party, Kenta Izumi, would have little effect on the Cabinet.

Mr. Yoshino noted that it is possible that the popularity of the Japan Innovation Party (Ishin, which almost quadrupled its seats in the House of Representatives in October) could spread nationwide from its current base around Osaka, and could become a potential threat to Kishida.   However, he emphasised the volatility of public opinion, explaining that for Ishin to gain political power they would need to become the leading opposition party within two or three years.  He ruled out competition within the LDP as a potential threat to Kishida, noting how his carefully arranged selection of Cabinet members makes it difficult for powerful figures within the LDP to sabotage his Cabinet.