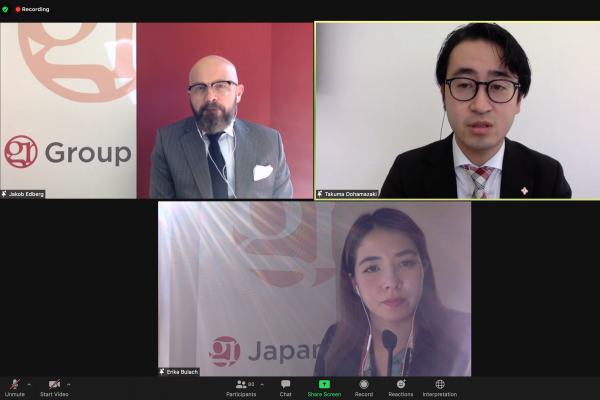 GR Japan welcomed Mr. Ohamazaki, one of Japan’s most respected election analysists to the International Policy Forum Webinar on 29 October.  Mr. Ohamazaki shared his latest predictions of the results of the House of Representatives election on 31 October, based on IT and big data.  He also shared valuable insights on the current political geography of Japan.  The webinar was hosted by GR Japan’s CEO & President, Jakob Edberg and Analyst, Erika Negishi Bulach.

Predictions for the 2021 House of Representatives Election

Mr. Ohamazaki predicted the upcoming election for the House of Representatives to be a rather difficult race for the Liberal Democratic Party (LDP,) who have been maintaining majority since 2012.  While he stressed that the LDP-Komeito coalition will maintain its majority, he explained that there was a chance that the LDP would not be able to reach a single majority on its own and noted some similarities to the famous 2009 House of Representatives election.  An increasing number of Japanese voters are growing tired of the LDP-Komeito coalition, which resumed under Prime Ministers Abe, Suga and now Kishida.  Meanwhile, five opposition parties – the Constitutional Democratic Party of Japan (CDP), Japanese Communist Party (JCP), Social Democratic Party (SDP), Democratic Party for the People (DPP), and Reiwa Shinsengumi – decided to form a loose alliance so as not to split their vote in constituency races.

Mr. Ohamazaki predicted that the Japan Innovation Party (Ishin) would triple its number of seats, as he expected that many voters who do not support the ruling camp but are doubtful of the CDP’s ability to govern would opt for the Japanese Innovation Party, which has continued to challenge both ruling and opposition parties.

He explained that there is a chance that Ishin would surpass Komeito in their number of seats and be able to submit bills to the lower house on its own.  Polls show that many independents who do not support any party are considering the CDP.

However, a number of other factors favour the current ruling party: the low expected turnout rate; a marked increase in LDP support following the resignation of former Prime Minister Suga; and the limited impact of the opposition alliance in the proportional representation part of the vote.  Considering these factors, Mr. Ohamazaki said is was highly likely that the parties of the ruling coalition parties would be able to maintain their majority, while it remained to be seen whether the LDP could maintain its single-party majority or the “absolute stable majority” that would allow the ruling coalition to lead all Diet standing committees and to dominate many Diet proceedings.

The impact of COVID-19 was expected to be minimal on the result of the election since the number of infected people had drastically decreased, and the election campaign was being held normally.

Expected Outcomes of the Election

The LDP’s loss in the by-election for the House of Councillors seat in Shizuoka Prefecture was unexpected, and opposition parties hoped that it would be a good sign for the upcoming general election.  In the final week of election campaign, there was therefore some momentum on the side of the opposition parties.

GR Japan’s prediction was for the LDP to lose 22 seats, while its coalition partner Komeito would gain one seat, achieving 30 in total.  Among the opposition parties, CDP was predicted to have an identical number of seats and the JCP to gain 6 seats, for 18 in total.  GR Japan also predicted a significant victory for Ishin, rising from 10 to 31 seats.

Prime Minister Kishida previously mentioned that he the election would have been a victory if the ruling coalition party obtained more than a simple majority of seats. However, if LDP were to lose a substantial number of seats and fail to maintain its single-party majority, Prime Minister Kishida’s leadership would surely come under the spotlight.  Moreover, possible losses of high-profile LDP members could extinguish the momentum for the Kishida Cabinet, which would make Kishida vulnerable and allow opposition parties to undermine his ability to deliver.  A “defeat” in the election would also put LDP in a tougher position in next year’s House of Councillors election.

Mr. Ohamazaki predicted that many old and experienced politicians could lose their seats, given calls for generational change in politics.  He noted, however, that at the same time many voters continue to lack trust in the opposition parties due to the “nightmare three years” (akumu-no-sannen – Abe’s term for the failures of the CDP’s forerunner, the Democratic Party of Japan, in government, from 2009 to 2012).  If the opposition politicians responsible for the “akumu-no-sannen” were to lose or retire, allowing the CDP to go through generational change, there would then be a chance that voters could start to support the opposition parties in greater numbers again.

Jakob Edberg noted that Prime Minister Kishida will need now to explain more clearly what he means by “new capitalism”, a phrase he has used throughout the election:  “Kishida need to come up with specific policies that enable both economic growth and redistribution at the same time.”

Mr. Edberg also pointed out the Kishida administration’s similarities to more traditional LDP administrations in the past.  If the election result ended up being very poor for the LDP, LDP members might ask whether Taro Kono or Sanae Takaichi should have been selected as party president instead.