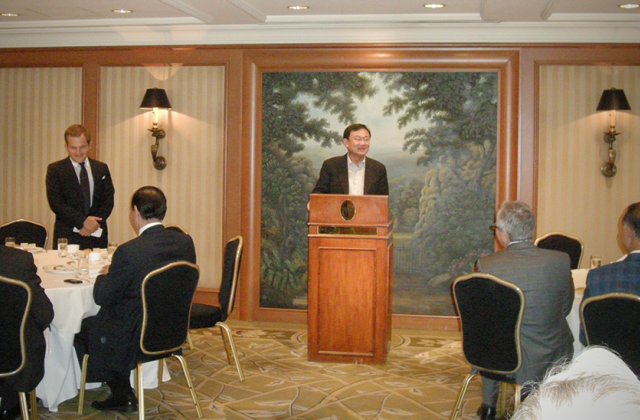 With the Pheu Thai party’s landslide victory in Thailand’s 3 July general elections, just a year after violent crackdown on protestors by the Royal Thai Army left 92 dead on the streets of Bangkok, the world is asking whether the return of a democratically elected government will put an end to the violence, bitter social divisions and military interference in politics.  While today’s international investors are betting on a bright future for Thailand, details of how the new government of Yingluck Shinawatra will implement its ambitious programme of economic reforms have yet to be disclosed.

Few are better placed to discuss the issue of Thai democracy than Dr Thaksin Shinawatra, Thailand’s prime minister from 2001-06, the brother of the new prime minister, and the figure who has dominated the country’s politics for the past decade.  Despite his ouster in a military coup in September 2006, his popularity with the electorate means that Dr Thaksin or pro-Thaksin parties have won every general election since 2001: in 2001, 2005, December 2006, 2007 and 2011.

Dr Thaksin was in Japan to promote goodwill between Japan and Thailand, visiting victims of the earthquake and tsunami in Tohoku as well as Japan’s political leaders.  During his visit, he shared his views on political transformation in Thailand with GR Japan’s International Policy Forum.