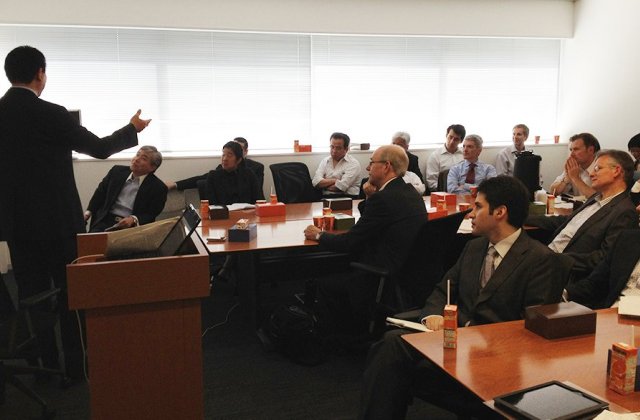 Our guest speaker for May was Mr. Keiro Kitagami, Vice Minister of Economy, Trade, and Industry, and Member of the House of Representatives with the Democratic Party of Japan (DPJ).  Mr. Kitagami is in charge of Japan's negotiations on free trade agreements, including with the Trans Pacific Partnership (TPP) and the European Union.

While public discourse on TPP negotiations in Japan has focused on tariffs and agriculture, future trade arrangements involving the US and EU will also likely include chapters on financial services, market entry for medical equipment and pharmaceuticals, the automotive sector and competition.  The Ministry of Economy, Trade and Industry (METI) has been underlining the importance of removing non-tariff trade barriers as part of its negotiations with developed economies, and regulatory reform also plays a central role in these efforts.  Mr. Kitagami, a former Ministry of Finance and Ministry of Agriculture, Forestry and Fisheries official who spent much of his young life in the US, shared his views on the prospects of the Noda cabinet entering negotiations, whether trade negotiations can help Japan to deliver meaningful reform, and the impact on the Japanese economy.