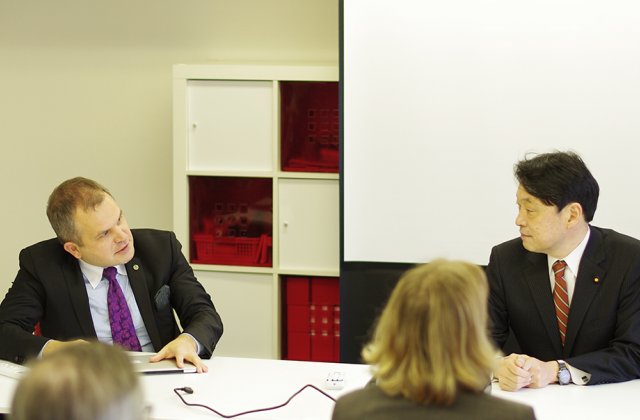 For our March IPF breakfast meeting we invited Itsunori Onodera, Minister of Defense from Dec 2012 until Sep 2014 and Senior Vice-Minister for Foreign Affairs in the First Abe Administration.

Mr. Onodera's time in office coincided with a period of tumultuous change in the East Asia security environment. From the Japanese perspective the new dynamic has been marked by continued increases in the Chinese military budget and China’s growing assertiveness both in the South China Sea and around the Senkaku Islands. Growing uncertainty about North Korea’s course under Kim Jong-un, emphasized by the conduct of its third nuclear test in 2013, the restart of the Yongbyon nuclear facility and several missile tests, has been another source of concern. Other long-standing historical and territorial disputes in East Asia, as well as global challenges such as renewed threats from terrorism and piracy have also reshaped the security environment in the region.

The Second and Third Abe Cabinets have taken various steps in the area of national security – from the creation of the National Security Council in 2013, the revision of the interpretation of the Constitution on collective self-defense and the relaxation of the ban on arms exports, to the formulation of the new concept of “proactive pacifism”.