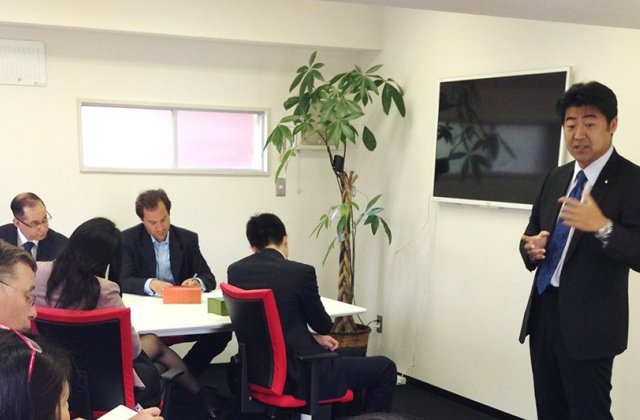 Our guest speaker for the International Policy Forum in May was Parliamentary Vice-Minister for Foreign Affairs Seiji Kihara. Mr. Kihara is an expert on financial policy. He discussed Prime Minister Abe’s new growth strategy, due to be announced in June, and the government’s plans to promote Japan as a tourism-oriented country.

Mr. Kihara served for 13 years as a Ministry of Finance official, including as Deputy Director of the Legal Division of the Budget Bureau and as Deputy Director of the International Bureau. He graduated from Law Faculty of the University of Tokyo in 1993. Mr. Kihara gained an MSc in Public Administration from the London School of Economics in 1997, and became the first Japanese citizen to be seconded to Her Majesty’s Treasury in the UK.

Mr. Kihara was elected to the House of Representatives with the LDP in 2005 and in 2012. In between his two terms in the Diet, he was a researcher at the National Graduate Institute for Policy Studies and a consultant with Jomon Associates .