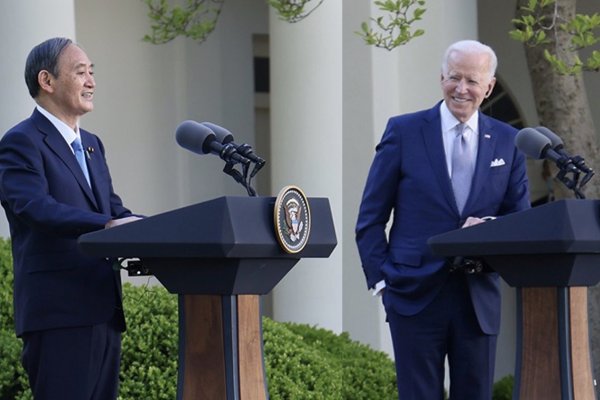 On April 16, Japanese Prime Minister Yoshihide Suga became the first foreign leader to meet with President Biden in the White House.  The Government of Japan was determined to be the first, because of the message it sends at home and abroad about the importance of the Japan-U.S. Alliance.  The Biden administration said “yes” for the same reason.

The summit capped several months of intensive activity in which the Biden administration has sought to shore up relations with key allies like Japan by emphasizing common values, shared principles, and cooperative, multilateral approaches to common challenges and opportunities.

From this perspective, the summit is seen by both countries as a success.  The Joint Statement outlining a “U.S.-Japan Global Partnership for a New Era” redefines the bilateral relationship in important ways.  It incorporates ambitious economic and security agendas with a new emphasis on climate and clean energy, technology and innovation, and Covid-19 and global health, in addition to welcome assurances on mutual security in response to the rise of China.

As positive and lengthy as the Joint Statement is, at almost 2,100 words, the hard part starts now.  There is still a great deal of work to do to fill in specific details in a range of complicated security and economic areas.  This presents both challenges and opportunities for companies and organizations with interests in these areas in Japan and the U.S.

Some of the main takeaways from the summit are:

None of this is a surprise, as these moves have been under discussion since the Biden administration took office.  But it is different, particularly compared to relations under the previous Abe and Trump administrations.

This is not to suggest that this is a seamless transition – it is not.  Some issues have been debated intensely by the governments behind the scenes, and there is an adjustment process on the Japanese side in terms of the new dynamics and priorities.  Overall, however, both sides seem to have come away with positive thoughts about the relationship and about the outcomes of the Summit.

In broad terms, the “U.S.-Japan Global Partnership for a New Era” is all about cooperation to manage the growing security and economic concerns about China.  Building on the agreements reached at the U.S.-Japan Security Consultative Committee (the “2+2”) in Tokyo on March 16, the “New Era Partnership” offers as much assurance to Japan about the strength of the U.S.-Japan Security Alliance as Japan could hope for.

U.S. assurances under the security treaty are also clear: “The United States restated its unwavering support for Japan’s defense under the U.S.-Japan Treaty of Mutual Cooperation and Security, using its full range of capabilities, including nuclear.  It also reaffirmed that Article V of the Treaty applies to the Senkaku Islands. Together, we oppose any unilateral action that seeks to undermine Japan’s administration of the Senkaku Islands”.

For its part, Japan has committed to “bolster its own national defense capabilities to further strengthen the Alliance and regional security”.  This will likely mean continued increases in Japanese defense spending (including procurement of U.S. defense systems), and some redefinition of the actions that Japan’s Self Defense Forces may take to support U.S. forces under certain scenarios.

The language on the Taiwan Strait – “We underscore the importance of peace and stability across the Taiwan Strait and encourage the peaceful resolution of cross-Strait issue”-- reflects Japan’s difficult balancing act between its main ally, the U.S., and its largest trading partner, China (20% of Japan’s exports go to China).  In this context, it is notable that this marks the first time since 1969 that a U.S.-Japan statement has referred to Taiwan by name.

On North Korea, the language on the importance of denuclearization is straightforward and predictable.  There is an endorsement of the Biden administration priority of trilateral cooperation between the U.S., Japan and South Korea (“We also concurred that trilateral cooperation with the Republic of Korea is essential to our shared security and prosperity”).  To Japan’s great satisfaction, the statement also “reaffirmed the United States’ commitment to immediate resolution of the abduction issue.”

The greatest departure in the New Era Partnership is in the economic sphere, where the Joint Statement and supporting documents signal a new direction.  Trade is mentioned only in the most general way, not as a priority, and with emphasis on new areas and broad cooperation aimed at countering China, not expanding bilateral trade and investment:

“The United States and Japan are committed to maintaining and further strengthening our robust bilateral trade relationship while advancing shared interests, including digital trade cooperation, the development of trade policies that support climate change objectives, World Trade Organization (WTO) reform, and promoting inclusive growth in the Indo-Pacific.  We will continue to work together bilaterally, as well as within the G7 and the WTO, to address the use of non-market and other unfair trade practices, including violations of intellectual property rights, forced technology transfer, excess capacity issues, and the use of trade distorting industrial subsidies.  We reaffirm our commitment to achieving prosperity and maintaining economic order in the Indo-Pacific region while engaging with other like-minded partners.”

The irony of the last sentence in light of the Biden administration’s reluctance to engage in discussions on a possible return to CPTPP is striking, but suggests an openness in areas that are narrower in scope such as digital trade.  In any case, economic relations will now be shaped by broad cooperation, with a focus on competitiveness and the Indo-Pacific:

“We will collaborate to enhance our countries’ competitiveness, individually and together, by deepening cooperation in research and technology development in life sciences and biotechnology, artificial intelligence, quantum information sciences, and civil space.  President Biden and Prime Minister Suga affirmed their commitment to the security and openness of 5th generation (5G) wireless networks and concurred that it is important to rely on trustworthy vendors. The United States and Japan will engage with others through our enhanced Global Digital Connectivity Partnership to catalyze investments and to provide training and capacity building to promote vibrant digital economies. We will also partner on sensitive supply chains, including on semi-conductors, promoting and protecting the critical technologies that are essential to our security and prosperity.”

As noted above, to supplement these broad commitments, the governments have agreed to a new “U.S.-Japan Competitiveness and Resilience Core Partnership (CoRe)”.   CoRE comprises four main elements, albeit without much detail at this stage:

The paucity of defined objectives and specific details suggests the governments were only able to put together broad goals and outlines in this short time frame.  This is not a criticism, but rather suggests that the next few months will involve more intensive work to flesh out these commitments with concrete actions, programs and operating guidelines for the next few years and beyond.

One of the most interesting points involves financing:

“The United States and Japan will align official international financing with the global achievement of net zero greenhouse gas emissions no later than 2050 and deep emission reductions in the 2020s, and will work to promote the flow of public and private capital toward climate-aligned investments and away from high-carbon investments.  We will work to advance sustainable development and a green recovery and growth, including cooperation on mobilizing additional public and private sector finance for net-zero transition, climate resilience, and disaster risk in the Indo-Pacific region and other partner countries.”

This seems to be aimed at moving Japanese development finance out of funding coal-fired power plants overseas, a matter on which Japan has faced increasing criticism.  It also alludes to the growing trend in Japan and the U.S. toward sustainable finance and ESG investment, and improved disclosure for climate-related financial risks.

The U.S. – Japan Global Partnership for a New Era, U.S. – Japan Competitiveness and Resilience Partnership (CoRe), and U.S.-Japan Climate Partnership on Ambition, Decarbonization and Clean Energy signal new directions in the relationship, and the strong mutual commitments, to each other and to the U.S.-Japan Alliance, are unmissable.  That said, there is considerable work ahead to determine the details, operationalize the many commitments, and achieve the results desired.  There are also challenges to this vision in terms of their complexity and cost, and it will take time to realize concrete outcomes – no small consideration in political terms.

For companies, civil society organizations and others with interests in Japan, the key point to note is that the landscape has changed in terms of the primary drivers of the relationship, including economic relations.  Important discussions will take place from this point, making this a critical time to get engaged and help shape outcomes in key areas, in ways that support or advance the new bilateral agenda.  It would be prudent as well to frame specific issues and opportunities in the context of the new priorities.  A lot is in play in very significant sectors of the economy, and it is an essential moment for stakeholders to make their voices heard in the process.