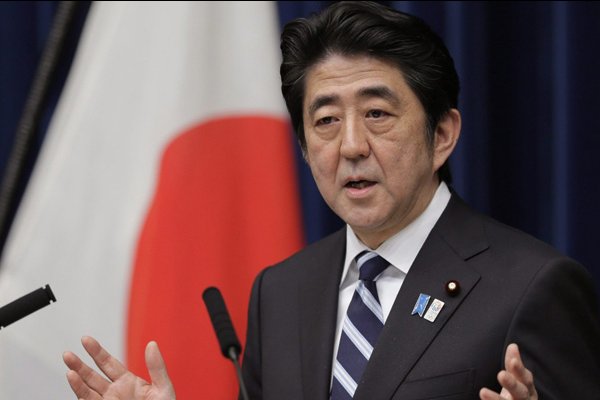 Japan's economy is too large to continue to drift through recession and deflation. In considering the challenges we face, I always start from this basic realization. To put the size of the Japanese economy into context, as measured in nominal GDP, it is larger than Germany and the U.K. combined.

In the first quarter of 2013, Japan's annualized rate of growth was 4.1 percent. Should this 4.1 percent growth rate be extended throughout the year, it will be the equivalent of the sudden emergence of an economy larger than Israel.

During the past 20 years, Japan has experienced periods of deflationary recession. As a result, nearly US$500 billion was lost in gross national income over the past several years. This is the equivalent of an economy as big as Norway or Poland simply disappearing.

The conclusion is simple. Simply by growing, Japan can make a significant contribution to the world. If a country like ours were to experience negative growth, that would likely be the ultimate recipe for "beggar thy neighbor," a situation in which the country will be criticized.

It is in Japan's national interests to support the safety and freedom of movement in the oceans, skies and space, and ensure the security of cyberspace. We have a responsibility to take a lead on preserving and cultivating these global commons in a responsible manner.

In Africa, Japan has an important role in providing knowledge and funds to support infrastructure development and facilitate investment opportunities, empowering women and improving maternal and child health. Japan spares no effort in contributing to the peace and security of the international community.

To continue with such principles is not a luxury but a necessity, and to ensure that Japan is capable of doing so it is imperative that we create growth.

I made this point clear during a recent speech at the Guildhall when I visited the City of London. To echo the approach of the late Baroness Margaret Thatcher, this is a case of TINA -- "there is no alternative."

Efforts to recover fiscal soundness are equally important. With the equivalent of Norway or Poland lost from Japan's economy as it contracted, the same amount was also lost from the taxation base, resulting in government debt more than twice the size of GDP. To lower the debt, it is vital to increase tax revenues through economic growth.

To ensure trust, we will make clear to our international partners that as we put our economy on a sustainable growth path, robust fiscal discipline will be maintained. In short, there is no fiscal reconstruction without growth.

This is why the "third arrow" of my economy policy, the growth strategy, is vital.

How do we go about this? Although the menu of policies may be well known, in short, we must ignite growth by simultaneously injecting a series of catalysts.

An open Japan and regulatory reform

First, we will open Japan and its markets, removing trade and investment barriers wherever possible. We will double the balance of direct investment in Japan by foreign companies. We should also be selling our agricultural products, which were never counted as export items before, to the global market.

Introducing people, goods, and capital from around the globe to Japan will be a powerful catalyst and will help to nourish our growth. It is for this reason that I thought Japan should join the TPP negotiations as early as possible.

Comprehensive regulatory reform comes next. Here, there are two important examples. First, structural reform in the electricity market, and putting an end to a market oligopoly that has continued for several decades. Taking the decision to separate the generation and transmission of electric power is to be a significant reform to a regulation that has existed over the last few decades.

Within this fiscal year, Japan's market for solar panels is expected to once again regain its status among the largest markets in the world. I expect to see the rise and growth of new companies, products and services through reform of the electricity market.

Urban reform as a showcase

The second major policy involves thorough deregulation and the creation of "National Strategic Special Zones" that will serve as a showcase of structural reform.

To make the most of urban functions, it is necessary to revise zoning regulations. The goal is to create urban configurations like Manhattan, where the distance between home and work is short and there is little difference between the daytime and night-time populations.

Another purpose is to create cities that are easy to live and work in for foreigners. To foster an international business environment, it is critical for us to provide the necessary support functions, such as high quality international medical and educational services, and making it easier for such services to be established.

Please do not think that this call for foreign direct investment and structural reform is old news. Although the menu seems to be the same, the person leading it is different. The "National Strategic Special Zones" are under my personal, direct responsibility as Prime Minister. I am willing to invest all of my political capital and to take risks to ensure success.

It goes without saying that having women participate more fully in the workforce and in management is no longer a luxury, but a necessity. We are behind in terms of utilizing the strengths and talents of our women. With our shrinking labor pool, activating our female workforce and re-engaging the elderly is also a case of TINA.

The United States is an example of a country that was able to increase labor productivity in the service and white collar industries, while at the same time improving the working environment for women. There is an urgent need for Japan to catch up.

This is an indispensable catalyst for a growth, and we are now working on initiatives to provide assistance, beginning with the speedy elimination of waiting lists for day-care centers for small children.

As you can see, we need to work on multiple fronts at the same time. The sense of urgency this creates underlines our commitment to the third arrow.

Japan, I've been told in the past, appears to be moving slowly yet achieves significant change within a few years. Even over the past two decades, during which Japan suffered deflation and economic downturn, the Tokyo skyline has dramatically changed. Those who stop by Tokyo Station today will be surprised at how completely different the scenery is from 20 years ago.

We are committed to build a robust Japan that will continue to foster and preserve global commons, and contribute to the peace and stability of the world.

In 20 years time, we will marvel at how much Japan has changed.