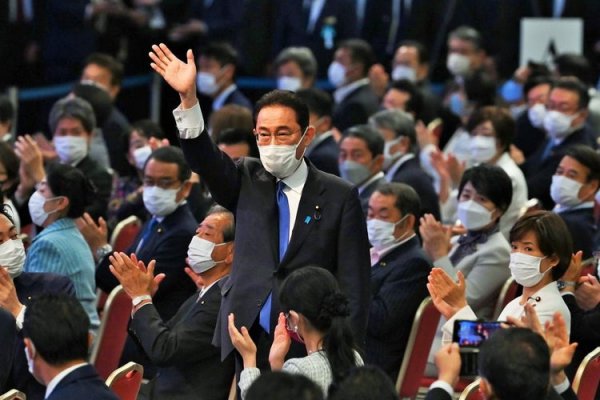 None of the four candidates obtained a majority in the first round.  The first round was a disappointment for Kishida’s main challenger, Taro Kono (also a former Foreign Minister and Defence Minister, and currently Minister for the Vaccine Roll-Out), whose best chance lay in a first-round victory based on strong support from party members.  Although he received more support than Kishida from the LDP’s rank-and-file, LDP Diet members voted overwhelmingly for Kishida.  Kishida’s strategy had been to win in the second round, when Diet members’ votes carry more weight, so few had foreseen Kishida winning the first round (even by one vote - 256 votes to 255).

The election entered a run-off between the top two candidates, with Kishida defeating Kono easily in the second round, by 257 votes to 170.

While it was predictable that Kishida would attract the majority of the Diet members’ votes, Kono’s poor showing was a surprise.  He did not perform well in televised debates and his prospects were hampered by late-arriving allies, including Minister of the Environment Shinjiro Koizumi, who lacks support from the LDP’s factions and is considered by younger LDP Diet members as their rival.  Kono also secured late backing from Shigeru Ishiba, another politician who, while popular with the public, is not favoured by the party’s heavyweights for he had pitted himself openly against former Prime Minister Shinzo Abe.  Furthermore, as public support for the LDP has steadily recovered since Prime Minister Yoshihide Suga announced his resignation, the need to vote for the popular Kono diminished.

Veteran LDP members may also have feared that an administration led by the “maverick” Kono would be unpredictable and depart from traditional LDP policy positions and values.  In comparison, Kishida holds middle-of-the-road views on many issues and seemed a safe choice who could ensure continuity.  For most junior LDP members, a Kishida win also appeared to offer more opportunities for personal advancement.  Unlike Kono’s top-down approach, Kishida is known as a consensus-builder who listens to the opinions of others, giving junior lawmakers a greater chance to participate in the policymaking process.  With both veteran and junior LDP members rallying around Kishida, his victory was surprisingly comfortable.

Although Kishida is the “establishment choice” compared to Kono, in his acceptance speech he vowed to show the public that “the LDP has been reborn” and indirectly criticised the current administration for alienating the public, suggesting he will diverge from certain LDP traditions.  Kishida has said he will establish a new form of capitalism that revolves around redistribution to address the growing economic disparity that emerged under Abenomics.  In this vein he has talked about the need for “stakeholder capitalism” over “shareholder capitalism,” with reference to the gains that stockowners have made relative to the overall population.  In remarks after winning the party race, Kishida stressed the importance of economic growth but said, “The fruits of economic growth have been concentrated among a small group of people.  Such fruits need to be shared among as many people as possible.  The gaps between the wealthy, the middle and low-income groups, the big and provincial cities, have to be closed.”  He did not provide details on this idea during the short campaign beyond a reference to a 20% tax on financial income, so it remains to be seen how this will translate into actual policies.

Despite the talk of change, continuity and stability will be the key characteristics of the Kishida administration.  The main policy pillars of the Suga administration, such as digitalisation and the goal of net-zero carbon by 2050, will most likely continue – but it is possible that these goals may be pursued with less vigour.  In economic policy, Kishida has signalled a continuation of the ultra-loose monetary policy of Abenomics to overcome deflation.  In foreign policy, countering the challenges from China tops the list of concerns, with continued emphasis on the U.S.-Japan alliance and the “Quad” (Japan, U.S., Australia, and India) work aimed at ensuring a “free and open Indo-Pacific” a critical piece of this.

Kishida’s top priority will be to revitalise the economy after Covid-19.  He has pledged to compile an economic stimulus package worth tens of trillions of yen to mitigate the economic impact of the pandemic, focused on assisting ordinary working citizens and families.

Famous for his consensual approach, Kishida’s administration will likely shift away from the prime minister-led policymaking that characterised the Abe and Suga administrations.  We expect a return to an inclusive policymaking process and the resurgence of the LDP’s Policy Research Council, whose power has ebbed in recent years.  As Kishida has strong networks in the bureaucracies, there is a high probability that ministry officials will take a leading role in drafting the Kishida doctrine.

In coming days, Kishida will make appointments to key positions.  He will then revert to campaigning mode for the upcoming House of Representatives election, which Kishida and the LDP are poised to win.