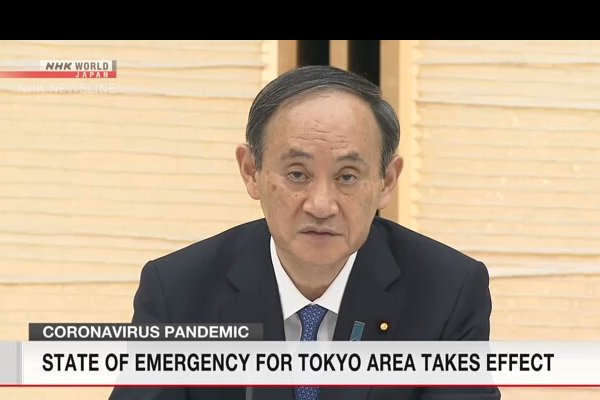 The move came after four prefectural governors from the larger Tokyo area – Tokyo Governor Yuriko Koike, Chiba Governor Kensaku Morita, Saitama Governor Motohiro Ono, and Kanagawa Governor Yuji Kuroiwa – met with Minister for Economic Revitalization and Coronavirus Countermeasures Yasutoshi Nishimura on 2 January, urging the central government to call again for a state of emergency. The motion by the governors followed new highs in the daily number of infections confirmed in the Tokyo area, notably 1,377 in Tokyo on 31 December.

Saitama, Chiba, and Kanagawa all recorded new highs in the period from 5-7 January, while Tokyo recorded over 2,400 new cases for the first time on 7 January.

Since taking office in September last year, Prime Minister Suga’s main policy priority has been to balance Covid-19 countermeasures with efforts to re-start the economy. Economic revitalisation stayed at the forefront with the “Go To Travel” and “Go To Eat” campaigns, which encouraged domestic tourism and dining with government subsidies. Suga has been consistently reluctant to call for measures that could further impact employment and consumption, even as infections have skyrocketed.

It was seen as a major setback for the prime minister when the “Go To” campaigns were scaled down and then temporarily suspended in December last year. The government’s insistence on running the “Go To” programme has been challenged by medical practitioners and researchers. Some research models have suggested that “Go To” users have been twice as likely to become infected, though the government asserted on 25 December that cases associated the programme are few, numbering roughly 350.

Given the increasing patient numbers and the call for stricter measures by Koike and the other governors, the government had little choice but to for call for a renewed state of emergency. At the same time, the government still hopes that it can minimise the impact on the economy by limiting application to the Tokyo metropolitan area (Tokyo,

Chiba, Saitama, and Kanagawa), and applying restrictions chiefly to restaurants and other locations considered high-risk such as cinemas and department stores. Restrictions are to come into force at midnight today (7 January) and continue to 7 February .

The government is telling the prefectures to instruct restaurants that they should not open beyond 8pm, and is encouraging firms to move again to remote work, so that at least 70% of the staff are working from home. Events are to be held at 50% of venue capacity with a maximum of 5,000 people in one place. While there has been discussion of increasing subsidies for businesses that comply with the new restrictions, there are as yet no mechanisms through which the government can force businesses to close.

The immediate impact on day-to-day business is predicted to be very limited and there are questions around the effectiveness of the state of emergency. The hope is that the government can reduce infections in the demographic groups in which the spread has been the most rapid, and thereby take the pressure off Japanese hospitals—and off Suga—until the vaccine is rolled out.